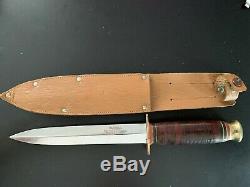 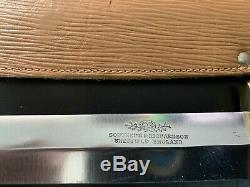 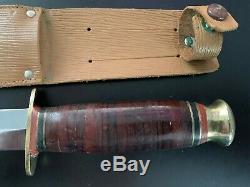 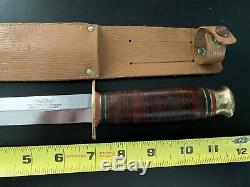 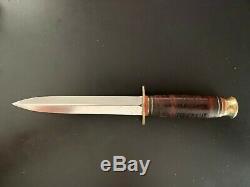 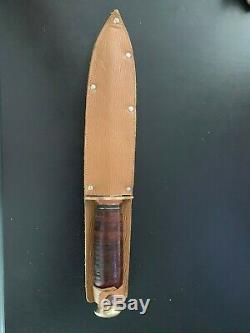 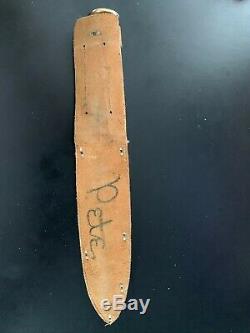 This is a very nice example of a World War II fighting knife that falls into the category of. Were in fact made in the theater of operations, many were also purpose built combat knives provide by established cutlers. This is oneof those knives and is clearly marked on the blade in two lines: SOUTHERN & RICHARDSON / SHEFFIELD, ENGLAND.

Southern & Richardson was a Sheffield, England based cutlery producer, which was established in 1847. In 1851 they moved tothe Weldon Works, Birds Nest and remained there until the 1920s, when they were absorbed by the firm of Needham, Veall & Tyzack , another Sheffield based cutler who had established the Eye Witness Works in 1875.

NV&T continued to produce blades under both the Southern & Richardson brand and their own Eye Witness brand until they went out of business in 1975. The knife is a classic pig sticker or double-edged dagger. The spear-point blade is 6 3/4 long, and has an overall length of 11 1/4. The blade is about 1wide at the hilt. The blade is mostly a shiny steel with scattered patches of peppering, and some pinprick pitting, all the result of having been stored in the leather scabbard for many years. The grips are a series of ovalleather washer of varying sizes, creating a minor palm swell towards the center of the grip and tapering at the front and rear. The knife has a brass cross guard that is about 2 wide.

The pommel is secured to the tang of the knife by a brass spanner nut. The knife is contained in what appears to be its original sheath.

It is a simple design with two medium weight pieces of leather joined by a double row of stitching and 6 roundreinforcing rivets. The sheaths hanger is cut to create a belt loop that can accept a maximum of a 2 belt. The hanger also retains the original hilt retention strap with a brass snap.

The snap was blackened, but the finish is wearing off and the inside of the brass snap and button are covered in lovely old green verdigris. The scabbard is in good solid condition and could be used today. The old owners name, "Pete" is written on the back of the scabbard. Overall this is a nice, maker marked example of the classic. World War II Theater Knife.

By a famous English cutler. While so many of the Theater Knives encountered today are clearly related to the Pacific Theater, this is great example of an ETO (European Theater of Operations) combat knife. This knife would be a great addition to any World War II edged weapon or knife display or to flesh out a display of gear that probably went ashore on D-Day in Normandy. The item "British WWII DAGGER FIGHTING KNIFE Southern & Richardson of SHEFFIELD England" is in sale since Tuesday, June 30, 2020.

This item is in the category "Collectibles\Militaria\WW II (1939-45)\Original Period Items\United States\Edged Weapons". The seller is "scubadivergary" and is located in New Port Richey, Florida. This item can be shipped to United States.